Formatting refers to how The Turing Way book is written and directly affects the book’s appearance and presentation.

The hard requirements in the consistency checklist ensure that The Turing Way prioritises accessibility, collaboration, readability and ease of use. The checks that deal with the The Turing Way’s formatting include:

Check 1: Use Markdown for creating your content¶

The Turing Way should be written in Markdown where possible, so that the Jupyter Book renders as intended.

Parts of earlier chapters in The Turing Way were written in HTML, making some of their content hard to read.

Fig. 109 Content written in HTML may not render properly.¶

When reformatted to Markdown, the table became cleaner and easier to read: 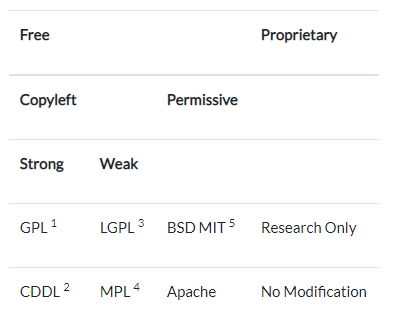 A PR that addresses this check can be found here.

Chapter content written in HTML are usually enclosed in tags which begin and end with angle brackets <>. W3Schools is an excellent resource for understanding what these tags mean, and Markdown reference guides, such as this cheatsheet, can help translate HTML formatting to Markdown. There are also helpful tools on the web, such as Turndown and CloudConvert, that convert HTML to Markdown with a single click.

Please note that if HTML is the only option for you to format your text the way you desire, you can use it only if the content in the online book can still be read and understood (use the Netlify preview in your PR to test). For example, superscripts and subscripts can be written in HTML because they always appear as intended. In addition, content like YouTube videos and tables with headers that span multiple columns or rows can be written in HTML.

The Turing Way has a book-wide stylesheet that controls the look of content written in HTML. If you include HTML in your contribution, ensure that your formatting includes the relevant classes and IDs from the stylesheet.

For example, if you want to add a YouTube video to your content using the <iframe> tag, wrap the <iframe> in a <div> tag, and give the div a video-container class as shown below.

This is also described in the Style Guide.

When writing a new chapter for The Turing Way, you might include a Checklist subchapter that itemises key action points you want readers to take based on the chapter content. For earlier chapters in The Turing Way, this subchapter is written in Markdown as a Task List with checkboxes:

However, the checkboxes do not display as intended in the online version of the book, for example:

Fig. 111 Checkboxes are displayed as square brackets in the web version of the book.¶

Thus, we recommend that you format your Checklist subchapters as unordered lists in your future contributions, and edit earlier chapters that follow the other convention:

Check 2: Use headers in sequential order.¶

Non-consecutive headers refer to an increase in header levels of more than one. For example:

Such an increase of two header levels results in warnings when building The Turing Way locally. Ideally, all Markdown files should start with a level 1 heading and increase sequentially as appropriate:

Several files in The Turing Way book do not follow this convention. A list of such files can be found in this issue, and this PR is a great example of how to fix a file with non-consecutive headers.

Often, a chapter might refer to content from another chapter to explain concepts or expand on points. Cross-referencing facilitates this by ensuring that the referred content is easy to find with a simple click. This helps make The Turing Way more navigable and accessible.

Cross-referencing is discussed in detail in the Style Guide. The subchapter explains what labels are, provides a naming convention for labels in The Turing Way, and gives several useful examples for how cross-referencing should be done.

Check 4: Use MyST for image formatting¶

Some figures and images in The Turing Way are embedded using Markdown syntax. While this works, it does not allow the images to adapt to the screen size of the device the book is read from.

Markedly Structured Text (MyST) is a flavour of Markdown that addresses this and enables responsive images in the The Turing Way.

It also allows the use of captions and alternative text (ALT text), which are the invisible image descriptions that are read aloud to readers of the The Turing Way who use a screen reader. If no ALT text is provided with an image, these users will be unable to understand the purpose of the image.

When writing ALT text, remember to:

Please note that images included in The Turing Way book should be less than 1MB. This allows the book load faster, especially for readers who may have slow internet connections.

Please refer to the style guide for examples on formatting images using MyST and adding ALT text to them. When including images in your contributions, it may be better to avoid the height parameter as the wrong value could make your image appear distorted on mobile devices. You should always check how your image looks in the Netlify preview of the book when you make a PR.

Check 1: Ensure that the names of chapters/subchapters are short and map exactly to how they are titled in the _toc.yml¶

Fig. 112 The title of this subchapter is ‘Using Spreadsheets for Research Data’, however the table of content refers to the same file as ‘Data Organisation in Spreadsheets’.¶

In ensuring that The Turing Way’s content passes this check, one recommendation to follow is to keep the titles short. When writing a new chapter, ensure that its title is short and has the same name in the table of contents. Similarly, when reviewing existing chapters, if its title and reference in the table of contents differ, make the shorter of the two the chapter’s title, and update the _toc.yml if necessary.

The _toc.yml is the file where the book-wide table of contents for The Turing Way lives.

Nonetheless, remember that the final title should adequately tell readers what to expect from a chapter or subchapter.

Although The Turing Way does not follow a specific title capitalisation style, some general, non-exhaustive rules to consider include:

There are helpful tools, such as CapitalizeMyTitle and Title Case Converter, that can be used to title-case headers when writing your content. Furthermore, headers in The Turing Way can be run through these tools to ensure they follow title-casing conventions. They can then be replaced within chapters and in the _toc.yml as appropriate.