The most common definition of reproducibility (and replication) was first noted by Claerbout and Karrenbach in 1992 [CK92] and has been used in computational science literature since then. Another popular definition has been introduced in 2013 by the Association for Computing Machinery (ACM) [IT18], which swapped the meaning of the terms ‘reproducible’ and ‘replicable’ compared to Claerbout and Karrenbach.

Barba (2018) [Bar18] conducted a detailed literature review on the usage of reproducible/replicable covering several disciplines. Most papers and disciplines use the terminology as defined by Claerbout and Karrenbach, whereas microbiology, immunology and computer science tend to follow the ACM use of reproducibility and replication. In political science and economics literature, both terms are used interchangeably.

In addition to these high level definitions of reproducibility, some authors provide more detailed distinctions. Victoria Stodden [Sto14], a prominent scholar on this topic, has for example identified the following further distinctions:

Table of Definitions for Reproducibility¶

At The Turing Way, we define reproducible research as work that can be independently recreated from the same data and the same code that the original team used. Reproducible is distinct from replicable, robust and generalisable as described in the figure below. 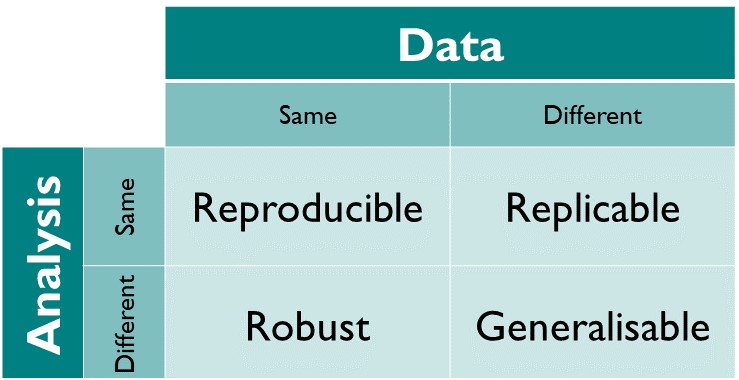 The different dimensions of reproducible research described in the matrix above have the following definitions:

More information on these definitions can be found in “Reproducibility vs. Replicability: A Brief History of a Confused Terminology” by Hans E. Plesser [Ple18].

The Turing Way recognises that some research will use sensitive data that cannot be shared and this handbook will provide guides on how your research can be reproducible without all parts necessarily being open.